The financing includes a debt facility of $300M and an equity contribution of $200M to progress Einride’s global growth of offering autonomous, electric and digital shipping technology

NEW YORK – Freight mobility technology company Einride announced today it has secured $500M in financing, including both a Series C equity raise and a debt facility. The debt financing, the largest asset-backed facility for heavy-duty electric vehicles, will provide transformative funding for Einride’s fleet of electric vehicles worldwide. The Series C provides a next step in the funding of new developments and deployments across Einride’s autonomous and digital offerings, as well as expanding Einride’s offerings to new markets and clients.

“The time is now to act on not only developing but accelerating the implementation of technology that will create a cleaner, safer and more efficient way to move goods,” said Robert Falck, Founder and CEO at Einride. “We’ve created the Einride ecosystem to provide the most resilient and future-proof approach to electrifying freight today. With the support from our investors and shared belief in this mission, we’ll continue to drive disruptive change to global freight at scale.”

The $300M in debt financing, which includes an initial facility rollout of $150M starting in January 2023, signed with Barclays Europe, ensures long-term funding for Einride’s current and future electric, heavy-duty vehicle fleets. The capacity of these vehicles is utilized by Einride’s clients as part of the overall Einride freight ecosystem offering. The multi-jurisdictional, multi-currency facility supports Einride’s global fleet across the US and Europe, including other future planned expansions.

“This landmark debt facility represents a key milestone in the financing of heavy-duty electric vehicles,” said Gordon Beck, Director of Securitised Products Solutions at Barclays. “The innovative asset-backed structure complements Einride’s unique ecosystem offering and is a continued demonstration of how Barclays uses our financial and capital markets expertise to support clients in driving the transition to net zero”.

By building freight mobility grids powered by a first-of-its-kind ecosystem — including the intelligent platform Einride Saga, electric and autonomous trucking fleets, charging infrastructure and connectivity networks — Einride unlocks a resilient, cost-effective future for freight. In the past 12 months, the company has announced expansions into several European countries — Germany, Belgium, Netherlands, Luxembourg and Norway — and deployed operations for numerous new clients including Electrolux, GE Appliances, a Haier company, and Bridgestone. In October of 2022, Einride successfully completed a pilot on a US public road with its autonomous vehicle — the first company to receive approval to do so for a vehicle without a safety driver on board. In 2019 it became the first company in the world to operate heavy-duty autonomous vehicles on public roads. 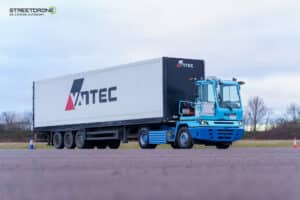